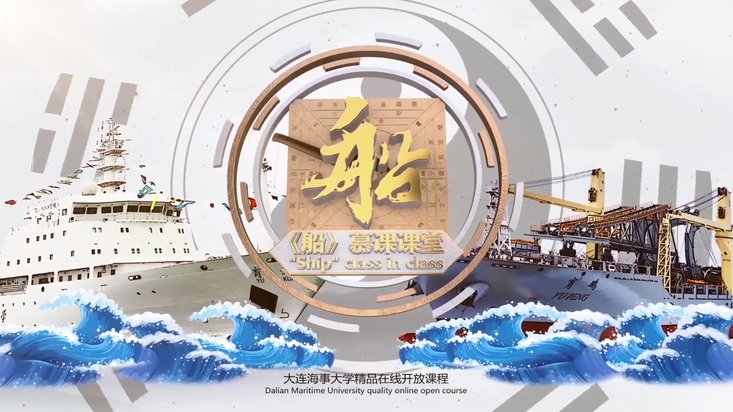 This course is based on China’s traditional marine culture and focuses on ship and 13 first-level disciplines. It learns from famous traditional Chinese ships such as “the canoe of Cross-Lake Bridge” and holds fast to its commitments to ships civilization proposed in I Ching. By building Big Ship Theory”, it guides people to recognize the humanistic connotation of “ships” and drive to a better place.

For example, the first part, Ship and Philosophy, focusing on the Canoe of Cross-Lake Bridge, illustrates the original aspiration of building ships enshrined in Chinese famous phiosophic work I Ching, “They hollowed out trees to form canoes; they cut others long and thin to make oars. Thus arose the benefit of canoes and oars for the help of those who had no means of interconnection with others.” This canoe is named after the Cross-Lake Bridge relics excavated in Hangzhou, China in 2002, which belongs to 8000 years ago. It is also the oldest canoe that has been evacuated in China and even in Asia. Thus it is known as the First Canoe in China and the First Canoe in Asia.

The last part, Ships and Art, focuses on two objects: the 9 pieces of “Picture Scrolls of Tang Ships and Lan Ships” collected by New York Public Library and 12 pieces of “Pictures of Tans Ships” at Matsuura Historical Museum, Nagasaki. They illustrate the art design’s philosophy explained in Chinese classics including Chuang Tzu, which is though crafted by humans yet still natural and pure: craftsmen outperform rulers and compasses, whose skills function and change naturally with the objects, needless to focus. Hence their minds are undivided and free from restrictions.

In a word, the course “Ship” is consistent with the Big Ship Theory. In the context of the Eastern philosophy, it integrates ship with various fields, fully embodying the free and spontaneous image of ship. The course enables us to reconsider the connotation of the new maritime civilization, contributing to a jointly-built maritime community of a shared future.

Ships (Part 2) is organiazed with six units. Each unit contains 3 to 4 short lecture videos with a quiz in the end. The end of course: November 10, 2019

Participants are encouraged to attend lectures, take a quiz each week and devote their sparkling ideas in Discussion.

This course is open to all with no prerequisites. Before learning the second part, you must learn the first part. Jiang Xin, graduated from the Communication Department of Simon Fraser University in Canada. She has many years of overseas study, work and life experience, and research interests in cross-cultural communication.

Evaluation : quizes in each unit and final evaluation.

Learners successfully completing the course (with a score of 60% or higher) will then receive a free course completion certificate.

The course is a part of the collection "Ships" divided into two parts.

Part 1 focuses on seven themes: SHIP AND PHILOSOPHY, SHIP AND ECONOMICS, SHIP AND LAW, SHIP AND EDUCATION, SHIP AND LITERATURE, SHIP AND HISTORY, and SHIP AND SCIENCE. Course start : June 3, 2019

This MOOC is produced by Dalian Maritime University

This work is licensed under a Creative Commons Attribution-NonCommercial-ShareAlike 4.0 International License.