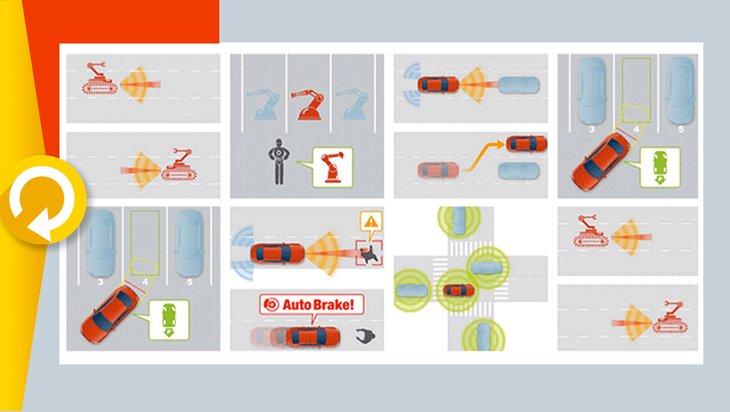 This course is an archived course. It remains open to registrations although it is not facilitated by the course teachers: its contents are no longer updated and may therefore no longer be up to date (course contents were created in 2015). If you register, you can freely consult the read-only resources but all collaborative spaces are closed (forums, wiki and other collaborative exercises): you cannot interact with the teaching team or with other learners. Furthermore, no attestation of achievement will be delivered for this course.

Mobile Robots are increasingly working in close interaction with human beings in environments as diverse as homes, hospitals, public spaces, public transportation systems and disaster areas. The situation is similar when it comes to Autonomous Vehicles, which are equipped with robot-like capabilities (sensing, decision and control).

Such robots must balance constraints such as safety, efficiency and autonomy, while addressing the novel problems of acceptability and human-robot interaction. Given the high stakes involved, developing these technologies is clearly a major challenge for both the industry and the human society.

The objective of this course is to introduce the key concepts required to program mobile robots and autonomous vehicles. The course presents both formal and algorithmic tools, and for its last week's topics (behavior modeling and learning), it will also provide realistic examples and programming exercises in Python.

This course is designed around a real-time decision architecture using Bayesian approaches. It covers topics such as:

The course is primarily intended for students with an engineering or masters degree, but any person with basic familiarity with probabilities, linear algebra and Python can benefit from it.

The course can also complement the skills of engineers and researchers working in the field of mobile robots and autonomous vehicles.

Basic notions of robotics, probabilities, linear algebra and Python (only for week 5). Agostino Martinelli rereceived a M.Sc. degree in theoretical physics (1994) and a Ph.D. in astrophysics (1999). Since 2006, he is working as a Researcher at Inria, France.
Current research interests: Visual-Inertial Structure from Motion, Nonlinear observability and the Fokker-Plank equation without detailed balance.

The course material is provided under Creative Commons License BY-NC-ND: the name of the author should always be mentioned ; the user can exploit the work except in a commercial context and he cannot make changes to the original work.

Terms of Use of the contents produced by users

Except otherwise specified, the contents produced by participants are shared under Creative Commons License BY-NC-ND: the name of the author should always be mentioned ; the user can exploit the work except in a commercial context and he cannot make changes to the original work.

This training course is produced by Inria within the IDEFI uTOP Project - contract PIA ANR-11-IDEFI-0037 – (http://utop.inria.fr/)